Communication and tracking within the Titans network

"Divide and Conquer"
The Titans Communicator (also referred to as a T-Communicator), is a device held by members of the Teen Titans and Honorary Titans, which is used as a form of communications between each other.

The Titans Communicator was developed by Cyborg and Robin and originally designed as a way of communicating between the five members of the Teen Titans. It has a built-in screen, webcam, and microphone underneath the cover, which allows for video calls. It is unknown where the camera is. The Titans Communicator also contains a tracking device, which can track the location of any Titan.

At the end of the episode "Deep Six", Robin dubs Aqualad as an Honorary Titan, the first acknowledged in the series. After the Tournament of Heroes in "Winner Take All", Robin handed them out to all of the assembled allies (Speedy, Hot Spot, Wildebeest), making them Honorary Titans in the process (though Aqualad was present he was already considered an Honorary Titan). Robin promised for them all to stay in touch. Gizmo was also at the Tournament of Heroes and was shown holding a communicator before Cyborg took it away from him; since Gizmo was a technically a villain.

When Terra joined the Titans, she was also given a Communicator, but she used it to betray the Titans to Slade. After Cyborg formed the Titans East, all of their members received a Communicator (Though at that point Aqualad and Speedy already had them; as they already earned the title of Honorary Titans).

When the Brotherhood of Evil planned to take down young superheroes around the world, the Titans Communicator became a core part of their plan. The Brain sent Madame Rouge after Wildebeest, but Wildebeest drops his communicator off a cliff, destroying it. Madame Rouge's next target was Hot Spot, and after defeating Hot Spot and transforming into him, managed to trick Robin into handing over his. Robin subsequently handed them out to his teammates, and together the Titans traveled around the world, handing them out to all of the Honorary Titans in case of an attack. They were unaware that they had given away the location of every Teen Titan around the world to the Brotherhood of Evil, and that the Brain could now use Rouge's stolen communicator to track them all down.

When the Brotherhood executed its plan to eliminate young superheroes around the world, the Brain activated the stolen Titans Communicator, sending the locations of all the Teen Titans to all the members of the Brotherhood, who subsequently attacked the unprepared Titans. After Robin found out about the Brain's strategy, he set all the Communicators to detonate, but it was in vain, because the Brotherhood had already pressed the attack on the Titans worldwide.

After the Brotherhood of Evil had been defeated, all the members of the Teen Titans and Honorary Titans were issued with replacement Titans Communicators.

Note: Official Merchandise only, no Etsy or other fan-made items, please. Thank You. 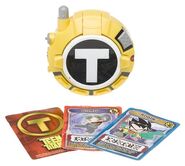 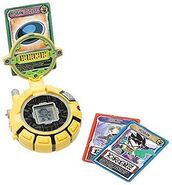