You give me give the Jewel of Charta. With its powers enhancing my own I can rule Tamaran with an iron fist! No one will dare challenge me!

The Jewel of Charta

The Jewel of Charta was a small diamond-shaped gem from the Swamp Moons of Drenthax IV. It had the power to greatly increase and further strengthen a Tamaranean's natural abilities to great power-levels. To signify its power/ability-enhancement, her blackbolts turned red rather than light purple.

When this was discovered by Starfire, the two sisters had a brutal fight with each other, which ended with Starfire defeating her elder sister and crushing the Jewel of Charta in the process, which reduced Blackfire's abilities to their normal level. However, while not wearing it anymore, her eyes still glowed red rather than their usual lilac. However, this is likely an animation error. 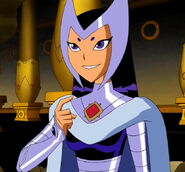 Blackfire in possession of the Jewel of Charta 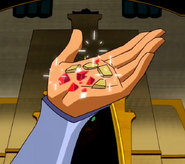 Starfire holding the crushed Jewel of Charta
Add a photo to this gallery
Retrieved from "https://teentitans.fandom.com/wiki/The_Jewel_of_Charta?oldid=91555"
Community content is available under CC-BY-SA unless otherwise noted.