This is a list of all Featured Articles on this wiki, past and present.

Revolution is the 33rd episode of the Teen Titans series and the seventh episode of Season 3.

Summary: It's the Fourth of July and everyone prepares for the traditional evening fireworks. But just two seconds before their start, Mad Mod suddenly pops up on the city's public TV screens and announces that the American Revolution has never happened; right after this, he activates his hypno-screens. The Titans are already wise to his tricks, but the rest of Jump City's population is not so fortunate and easily falls under Mod's sway, who reclaims the city in the name of England, proclaims himself king, and attempts right away to conform his brainwashed subjects to British culture. It is only after realizing the reason for celebrating America's independence and rediscovering one of the key principles of democracy that the Titans can overcome the iron-fisted villain.

Starfire: Please, this is a celebration of the month of July or of the number four?

Robin: Neither. It's Independence Day. Sort of like America's birthday.

Starfire: Oh! Should we then bake the America a cake?

Beast Boy: No cake, and no tea! - See, it all started back in 1492 with this tea party, in Boston. King George - or maybe it was King Norm? - Anyway, the British were trying to make the colonists drink all this tea. But they were like, "Dude! No way! We're sick of nasty old tea and your crummy English muffins!" So they decided, "Revolution!"

Raven: Where did you learn history? A cereal box?

Jinx is an Honorary Titan and former villainess. Prior to joining the Teen Titans, Jinx was a top student of the H.I.V.E. Academy, the leader of the H.I.V.E. Five and a brief member of the Brotherhood of Evil. She is the love interest of Kid Flash. In her period with the H.I.V.E., Jinx is a very ambitious go-getter with a slightly mean streak. Because of her goals to rise among the ranks of villains, she tries her best to be an effective H.I.V.E. member under both its regimes. Jinx has proven to be a largely capable and determined, if subconsciously insecure, leader. At first, Jinx appears to be quiet, mean, mysterious, often speaking in whispers, and sometimes depicted as rather crazy because of the evil, crooked grin she usually wore when battling. However, in "Lightspeed", we see a more determined, outspoken, and more sane Jinx who wanted to be respected and not shunned because of her bad-luck powers. Jinx is described as an enchanting sorceress who wields the power of bad luck, which manifests as pink, lightning-like energy blasts/waves fired from her hands. Jinx's powers portray a manipulation of probability, or more specifically, the ability to "bring bad luck" to her enemies. When she is not shooting waves of energy her eyes glow a bright pink instead, and can make structures crumble. (more...)

Kid Flash is a superhero, an Honorary Titan, and the romantic interest of Jinx. Wally West was caught in a chemical explosion caused by a lightning strike. The electricity that infused with the potentially dangerous mix of chemicals radically altered Wally's body, giving him the ability to move and think at superhuman speeds. Subsequently, he became the young sidekick of The Flash and was dubbed with the moniker Kid Flash. At some point, he left his mentor to become independent and make a name for himself, only to become one of the Teen Titans later on. He came to Jump City after the Titans East, following a period of filling in for the Titans, had been called back to their headquarters. He quickly came to blows with the H.I.V.E. Five, who couldn't at first apprehend him. However, Kid Flash took a close personal interest in their leader, Jinx. (more...)

Terra was a former member of the Teen Titans, whose role as a hero or villain is complicated. Until the episodes Aftershock - Part 1 and Part 2, she was confused, and wished to be a heroine and friend of the Teen Titans but was led astray by Slade, who tempted her by promising her that he could teach her to control her powers, in return for her unwavering loyalty and apprenticeship. Not much is known about Terra's life before she joined the Titans, except that she traveled around very frequently. However, there are some clues to her past. When Slade had Terra alone with him in the episode "Terra", he stated that Terra did try to help others. He then said that on each occasion, something even worse happened as a result of using her geo-kinetic abilities. This is possibly the reason for her frequent travel. (more...)

Red X was originally a cover identity Robin had conceived for an attempt to get closer to Slade. After being outsmarted by Slade and nearly getting himself killed, Robin locked up the Red X suit, vowing never to use it again. Some time later, however, the suit came into the possession of an unknown culprit. This new Red X had intended to use the suit for his own financial gain, but because the chemical Xenothium powering the suit was nearly exhausted, Red X stole a Xenothium scanner to hunt for more of the substance. This eventually brings Red X into conflict with Robin and the Teen Titans. The new Red X is a mysterious, daring enigma who delights in toying with his enemies, holding no allegiances and working to suit his own ends. Red X assumes the role of an anti-hero, and while he considers Robin to be a personal rival, he also appears to grudgingly respect him enough to aid him in times of need. He has since become a popular recurring character in the series. (more...) 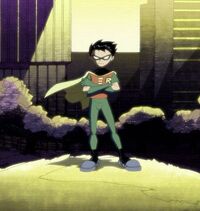 Robin is the leader of the Teen Titans and an extraordinary fighter. Trained by Batman after the death of his parents, Robin meets and befriends four other superheroes, who become the five founding members of the Teen Titans.

Robin is a technological genius; he has designed and created all of the weapons and high-tech gadgets he currently possesses. Robin is a natural leader, and most of his ideas and plans are for the benefit of many, most importantly his teammates and his Tamaranean girlfriend Starfire.

Throughout the series, Robin's most hated enemy is the elusive criminal mastermind Slade, who has clashed with Robin on a number of occasions. Robin's serious attitude and the desire to win every fight is his greatest strength, because it gives him the courage and determination to fight without fear or hesitation. (more...)

Tamaran is a fictional alien planet in the Teen Titans universe. It is where Starfire and her family were born. (more...)

Retrieved from "https://teentitans.fandom.com/wiki/Teen_Titans_Wiki:Featured_Article/Archive?oldid=39049"
Community content is available under CC-BY-SA unless otherwise noted.