The T-Ship, formerly known as the T-Sub, is the Teen Titans' primary mode of long-range underwater, aerial and space travel.

The T-Ship was originally constructed by Cyborg as an underwater vehicle, but later on, at least one version was built which would allow aerial and space travel. All and all, the vessel became the principal means of long distance travel even for those who could fly. It is seated for five passengers and divided into five sub-components which can split up into smaller, self-sufficient vessels with their own propulsion systems and armament. (This feature applies to the Jet and Space T-Ship versions; it is unknown whether the Submarine version has this as well.) Each version has enough oxygen to sustain its passengers for an, as yet, indefinite period of time.

The T-ship's seats are distributed as follows:

Apparently, the ship can be configured to be piloted by any of the attached pods, even if at least one pod has been separated. This is evidenced in "Stranded" when the combined pods of Beast Boy and Cyborg are flying, controlled by Cyborg's (although piloted by Beast Boy). 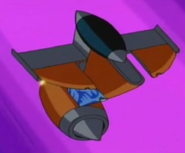 Add a photo to this gallery
Retrieved from "https://teentitans.fandom.com/wiki/T-Ship?oldid=112444"
Community content is available under CC-BY-SA unless otherwise noted.