"Employee of the Month"

Mega Meaty Meat is a fast food restaurant which appeared in the episode, "Employee of the Month". Beast Boy, a vegetarian, decided to work here against his will because he was desperate for the Employee of the Month's reward, a prized moped. The uniform is a white butcher's cap and a white apron.

It was revealed that the restaurant is actually a front for an alien invasion as it houses the Source's mothership, as well as the launching site of the UFOs which the Titans had been fighting since the start of the episode. It also carries "Destruct-O-Tron", a large spherical device capable of blowing up the entire Earth.

Mega Meaty Meat is run by the Source and Bob, both of which are made of Newfu. Although named Mega Meaty Meat, none of the food served is actually meat. The meat is just colored Newfu, an other-worldly alien-type of tofu.

The mascot of Mega Meaty Meat 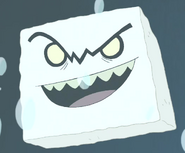 The Newfu mothership revealed behind the restaurant facade

A tank which houses The Source
Add a photo to this gallery
Retrieved from "https://teentitans.fandom.com/wiki/Mega_Meaty_Meat?oldid=115472"
Community content is available under CC-BY-SA unless otherwise noted.