What Time is it, Mr. Wolf?
Magic & Misdirection is issue #12 of Teen Titans Go!.

Special one-year anniversary issue. The six Titans go face-to-face with their strangest foe: Mumbo. Can they survive more of his "magic" tricks? 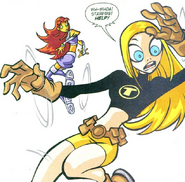 Retrieved from "https://teentitans.fandom.com/wiki/Magic_%26_Misdirection?oldid=115853"
Community content is available under CC-BY-SA unless otherwise noted.