Ravager returns to Jump City, hoping to claim "What is rightfully hers".

Ravager finds Wintergreen and Professor Chang, both of whom had something which belonged to her father. It is revealed here that all of Slade's Robot Commandos were built by Professor Chang. However, Professor Chang had already sold the robots to General Immortus in Teen Titans Go! #35, which angers Ravager so much that she leaves him shaking with fear when the Titans come to his aid. Now Ravager goes on a rampage in Jump City, determined to carry on her father's legacy; defeating the Teen Titans once and for all. However, after fighting with them, Ravager understands that she does not have to carry on her father's legacy, and needs not follow in his footsteps as a villain. The Titans offer her a family and they tell her that she is free to make her own decisions in life. Touched by the Titans' words, she decides to join and train with them until she is ready to face her future. 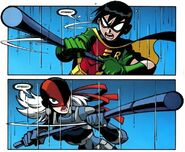 Retrieved from "https://teentitans.fandom.com/wiki/Legacy?oldid=115857"
Community content is available under CC-BY-SA unless otherwise noted.