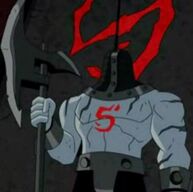 The Guard was in the episode The End part 3. He was seen fighting Slade with his axe his appearance is he has a helmet on with no eyeholes Slade kicked him and made one. Also, Slade put a mine bomb on the door that he was guarding and exploded causing Slade the skeleton get his flesh and blood back. After the mine exploded all was left was his helmet so he could be killed. Slade then took the guard's powerful axe to use against Trigon.
Retrieved from "https://teentitans.fandom.com/wiki/Gate_Guard?oldid=39090"
Community content is available under CC-BY-SA unless otherwise noted.